Last week (27th of march 2013) it was a big day for me and for the belgian clojure community  (or so I hope): The first ever clojure meetup in Belgium had taken place!

The event itself was a great success (if I’m allowed to say so) and I certainly had a lot of fun. A week later I thought it might be a good idea to look back.

So here is a short debriefing about how thing went.

First I’ll summarize who we are. (more details here)

We consist of three Clojure enthusiasts: me, Wim and Frederik. Wim is the co-owner of the company ixor located in Mechelen. And has been so kind for making it possible to use the bureau of ixor as our meetup location. Frederik is a PhD student at Sint Lucas Antwerpen, studying the link between computers and art. He also does graphic design commercially.

In totality 13 people showed up (including me, Wim and Frederik) which I think is already pretty amazing for a first time!. By 7pm the first people were arriving.  While waiting for everyone to arrive Wim had prepared a lot of tasty refreshments, we even had a nice cheese platter! So many thanks for making that possible Wim!

At 8pm we could start with our first presentation, which was given by myself. I introduced myself a bit clumsy (You can imagine I was a bit nervous… ) and told about why I started this meetup in the first place and introduced also Wim and Frederik. 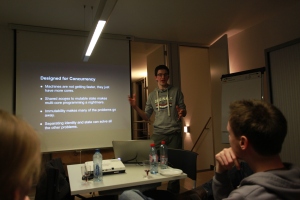 Why Clojure talk by Thomas Goossens

The real tricky part was giving a ~ hour talk on why clojure was created. Of course I was a bit unclear and even made some mistakes. But that was no problem at all, the people would just start asking questions about it and that sparkled some very interesting discussions during the talk.

But overall, I got the impression that my presentation was at least decent, I even made the audience laugh sometimes (I hope that is because I made funny of course :p ). If you – the reader – are one of the attendees of this meetup, you may always give me some feedback on how I performed!

When my talk was reaching its ending I was totally mindblown that I actually filled up one hour (I forgot to look at the time during the talk). Something I can be proud of I think (shameless self-recognition alert!).

We then had a short break, having some drinks and eating cheese.  During this time we had some interesting discussions about clojure, datomic and other interesting topics.

Then after 20 minutes or so, Frederik prepared himself to give his talk. In his one hour session he showed us some basis Clojure syntax to familiarize everyone with it. Then Frederik talked about the fact that “Google Reader” was going to be shut down and that he didn’t like that. So he proposed to make a very minimalistic, single-user, but working google reader alternative. It was a very interesting session where Frederik also proved that Clojure’s java interop capabilities can be really useful. 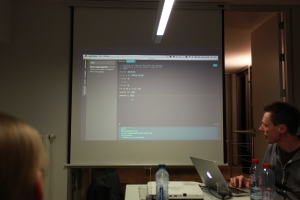 After one hour, Frederik actually had a working RSS reading web-application, so congratulations I’d say!

After the earned applause some people started leaving (because they had to catch their trains 😉 ), the remaining people left around midnight so in the meantime we had plenty of interesting discussions.

This about sums it up. if I may say so, I think it was a great success and I’ll be happy to organise a next iteration in the near future.

To conclude, here’s a list with some useful links:

The official webpage of the event

Why clojure from Thomas Goossens