You are not as unique as you think you are – and that’s ok!

xkcd pictures my line of thought perfectly with this cartoon. You just cannot read someone else’s mind.

When I have a problem or difficulty with something, I often (incorrectly) assume that I’m one of the few persons that has this problem. But after a number of experiences I realized that you and me are probably not so different after all. And that’s totally fine!

This means that when you have a problem, you are probably not the only one. “Of course!” you might say. “People have been saying that for years.”  While that’s completely true, I however only recently started to really experience this myself and want to share my thoughts with you.

Too often I have been in the situation where I dare not share my thoughts because I was too afraid that people might find it stupid. This is totally unjustified. Quite often other people will share the same problems or thoughts. It obviously also often happens that people disagree with you (strongly). But don’t let that immediately throw away your own opinions but try to learn why they disagree. It will probably just reinforce or broaden your own opinion.

I now want to share some of the situations where I experienced the effects this “philosophy”.

The past year I haven’t written on my blog as frequently as I used to. This was partly because I started to think that maybe what I write is complete nonsense and people might take me for an attention-seeking idiot. But what I learned is that indeed some people find it useless nonsense but also that some people can appreciate it. And that is enough for me.

When you have a new idea for an enterprise and you google it, it is quite likely that you will find many people that already had the same idea. Don’t let that stop you! This means that a lot of other people find your idea also a good idea.  After all: the idea is one thing, commercialising it is a whole different story!

Do you like to dance with someone else? But you dare not ask him/her because he/she or others might find it stupid. In my experience he/she probably thinks the same and will be delighted that you ask them for a dance. Others will probably start to think why they dare not ask someone for a dance as well.

Studying and the classroom

While you are studying or during the lectures you will often encounter things you don’t quite understand. Please dare to ask your question. You are almost certainly not the only one with the problem! You will learn much more when you dare to ask questions. I know it is hard. In some way university even taught me to keep quiet. It is a social taboo that you and I need to break.

Sometimes however it might occur that you are one of the very few that have a particular problem. In that case you should try to find out why that is the case. Maybe you are studying/thinking fundamentally wrong. At least by asking the question you have spotted a potential underlying problem! 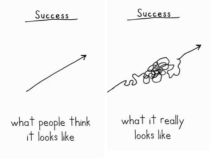 As beautifully illustrated by the cartoons in this post, one of the causes of your apparent uniqueness is that you cannot read the mind of someone else. You don’t know how they feel or how they achieved something. You make assumptions about it based on what you see now.

For you, it might seem that for some people success and achievement come by itself without them having to do real effort while you seem to fail constantly. You make these assumptions because mostly, you only hear the success stories and start to compare those with your own life story. I can assure you that not every path is full of sunshine and rainbows. Sometimes you do have to cross the mud, fall into it, get yourself dirty and get up again just to fall again.

The interesting stories are not a collection of achievements but rather stories of how something was achieved.

Last but not least…

Everything in this post might be obvious to you or seem needless to say. In that case I’m very glad for you. While I know that some of you will think this, I still want to share this post because I considered it valuable and assume that probably some of you might find it valuable as well.

The lesson is that you should not let yourself be guided too much by people who disagree with you.